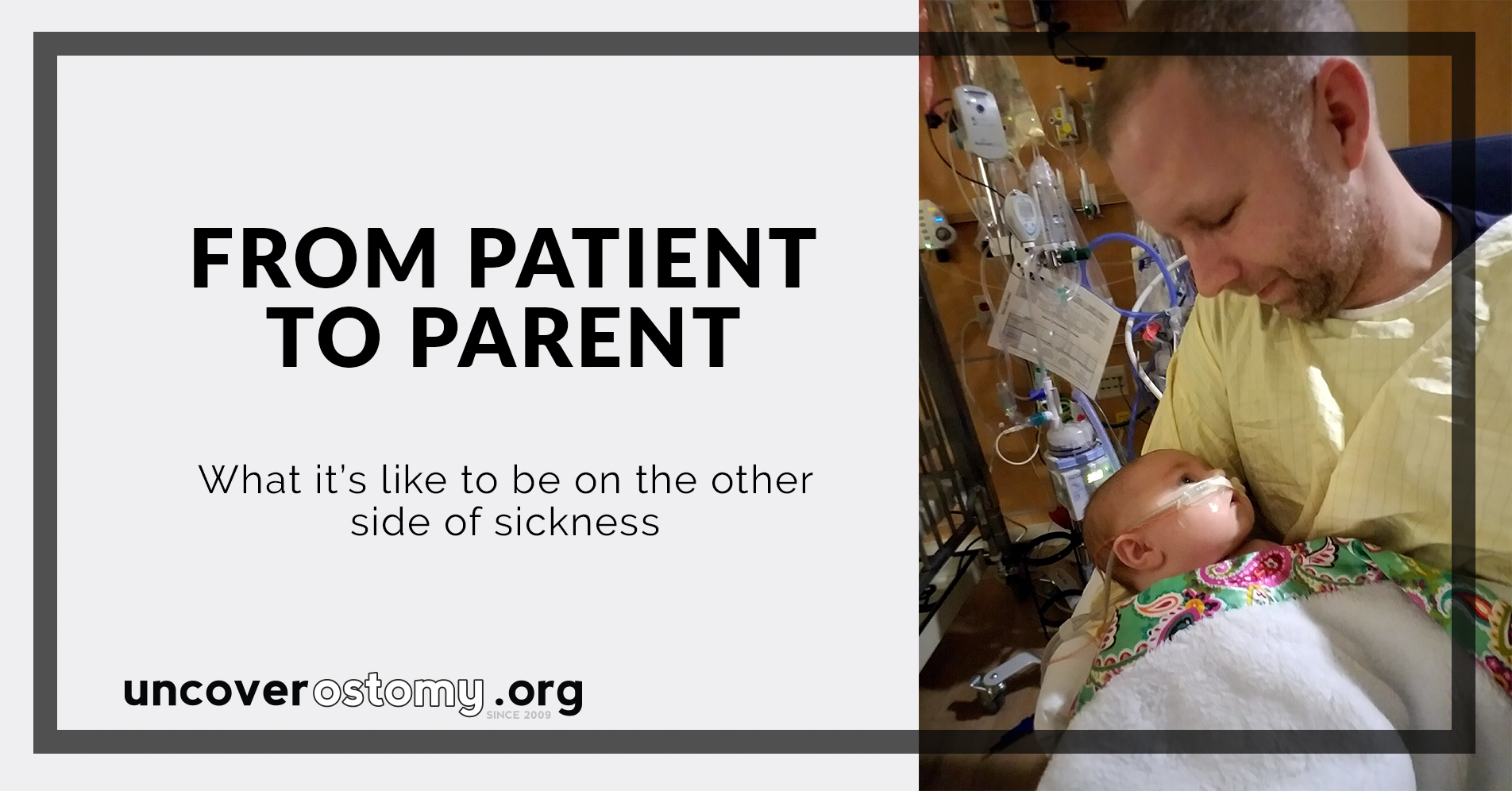 27 Apr From Patient to Parent

During the time that I was a patient being treated for my Crohn’s Disease, I encountered many challenges, mostly similar to the stories that I had heard from other Crohn’s patients. After hearing so many of these stories, I came to terms with what I had to deal with, knowing that my illness wasn’t much different than anyone else’s. If these other patients could get through it, so could I.

What I didn’t realize was that a chronic illness can be a lot more than just the difficulties that the patient has to endure. I was in pain, had lost my appetite and then weight, I was as pale as a sheet, and I had no energy, as is customary during a Crohn’s flare. What I didn’t realize at the time was how the symptoms of my disease not only affected me, but how it affected those who meant the most to me. I didn’t realize it until February 20th, 2018.

What I didn't realize at the time was how the symptoms of my disease not only affected me, but how it affected those who meant the most to me

Yes, for those who don’t know, my wife and I had our 2nd child, a little girl named Keira. A little girl that’s not only made our family bigger and better, but a little girl who’s completely changed my life.

On a Sunday night in February, 7 weeks after Keira was born, we noticed she had developed a slight fever. The next morning, my wife took her to the paediatrician who prescribed a regimen of Tylenol and a sent her on her way with a “call me if things get worse” as she went out the door.

Things didn’t improve, so my wife took our daughter back in to the doctor’s office, who then added some electrolyte fluids to ensure hydration and added another “call me” as my wife and child left left.

It wasn’t until later that day while making dinner at the firehouse, that my wife called. I saw her number and my stomach dropped – I guess I had a “gut feeling” (minus some guts.) We needed to go to the emergency room. I left the firehouse and met my wife and daughter at the local children’s hospital, where we got checked in and waited to be called back.

I guess I had a gut feeling (minus some guts.)

While waiting, I looked down at Keira’s little face and started noticing things that a trained paramedic (like myself) would notice in a patient: I watched her chest quickly rise and fall as she took breaths, slower than the week before. I saw a dullness in her eyes that wasn’t what I had seen in the first few weeks of her life. She wasn’t acting like the normal feisty girl that my wife and I both knew and it was clear that something was wrong. Little did we know how wrong.

The ER doctors admitted us and we immediately met up with our nurse for the evening, who put together a plan for rehydrating Keira though an IV. We settled in, but kept an eye on our little girl, who looked as restless as we felt. Eventually, I drifted off to sleep in an uncomfortable hospital chair. 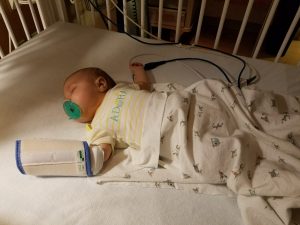 “Hon, I didn’t want you to wake up and panic, but there is about to be a lot of people in the room,” my wife said to me as I woke up and realized where we were.

In came a bunch of folks: a charge nurse from the PICU (Paediatric Intensive Care Unit), a Respiratory Therapist, 2 physicians, and a handful of other people that I couldn’t tell you what they did. The team did a quick assessment and expressed concern for Keira’s breathing.

Later that morning, the staff “rounded” around Keira and it was decided that she needed some additional care and that she was going to be moved to the PICU, so my wife and I stood and watched as they wheeled her to her new room.

After having been tested, Keira was positive for RSV, Respiratory Syncytial Virus. In normal adults, RSV is not unlike a common cold, however, in kids, it is very dangerous.  Since her breathing had gotten worse, the PICU staff put her on high flow oxygen – she didn’t appear to be getting any relief.

By this point, it had only been 24 hours, but it felt like a lifetime. That was until everything stopped. 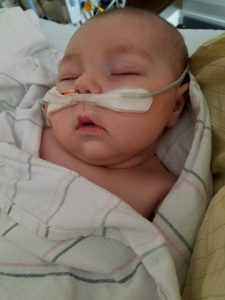 I was coming back after grabbing dinner for my wife and I when I saw her talking to the doctor , who was kneeling next to her (just a heads up, that’s never a good sign.) Based on my training and the look in my wife’s eyes, I already knew what they were talking about. The doctor decided it was time to intubate Keira, meaning, she would have a breathing tube put in her lungs, which would attach to a machine that would breath for her.

(By the way, you know how they say doctor’s make the worst patients? I think the same is true for paramedics.)

Immediately after that decision had been made, my wife and I were escorted to a waiting room while the staff medically sedated Keira, placed the breathing tube and put her on the vent.

These were the scariest 24 hours of my life.

It had only been 24 hours since our arrival to the Emergency Room to Keira being moved up into the PICU and being put on a ventilator. 24 hours and our world changed.

Before I became a parent, I didn’t understand.

If you are or have been a parent of a sick child, you know exactly what I’m referring to.

Before we had our older son William, I was told to “prepare to love something as you’ve never loved something before,” and I can tell you that is 100% true. It’s hard to put it into words, but it’s a love that comes from every fibre in your soul for these little beings.

What no one ever told me, though, was how much pain I could feel.

Seeing my tiny, newborn daughter hooked up to a breathing machine in a sterile hospital environment broke me. It broke in a way I never knew was physically possible.

Before I became a parent, I didn’t understand.

For the first 12 nights, my wife and I both stayed in the room with Keira, leaving only to get food at the cafeteria downstairs. We eventually realized that we needed to give William our love, too, so we started taking turns going to where he was staying to put him to bed.

It was obviously hard for William to see us leave every night, as he would try to come with us, so we decided that we needed to take turns staying with him, too. During my wife’s first night home with my son, she had to tell him, “I’ll be here in the morning when you wake up” for him to truly understand she would be there and so he could fall asleep.

The following 21 days were a rollercoaster of emotions.

Keira got worse and then she got a bit better. They were able to remove the breathing tube, but then had to put it back in 2 days later. We never knew what to expect other than feeling anxious and scared.

For all those who have read this far and followed the emotional ride of this blog post, I am happy to say that Keira is on the mend. They removed the breathing tube again and moved her to a non-ICU floor. Shortly after that, she was sent home. Today, she continues to heal and get back to being the little girl we have only known for a short while. 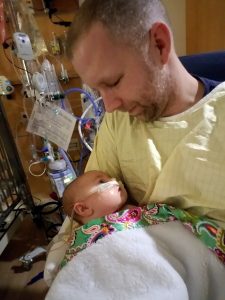 This experience is one that I could never imagined, even as someone who’s spent far too many days, nights, weeks, months and years as a patient. I’ve finally seen what it’s like on the other side, as being the person who cares about the patient. In some ways, it felt similar to being the sick patient, and in others, it almost felt like it was worse being on the other side.

Jessica wrote about Spoon Theory in her last blog, where spoons equal measurements of energy, or the lack of energy she experienced while she was sick. Even though, in this case, I wasn’t the sick one, I can honestly say I had no spoons of my own.

During my daughter’s hospital stay, I was drained of all spoons/energy, using what little I had to support my wife and my son, while we sat and hoped that our little girl would be ok.

33 days is how long Keira was in the hospital plus we had another 7 days of home care. 40 days is what made up the worst single day of my life – at least, that’s what it felt like.

Now, our daughter has rebounded and is showing us her spunk. We see the life in her eyes, the energy bursts she gets when she’s mad at a wet diaper, and the smiles she gives us when she’s happy… all of these things I never imagined would mean so much to me.

I have all my spoons again, and Keira does, too. 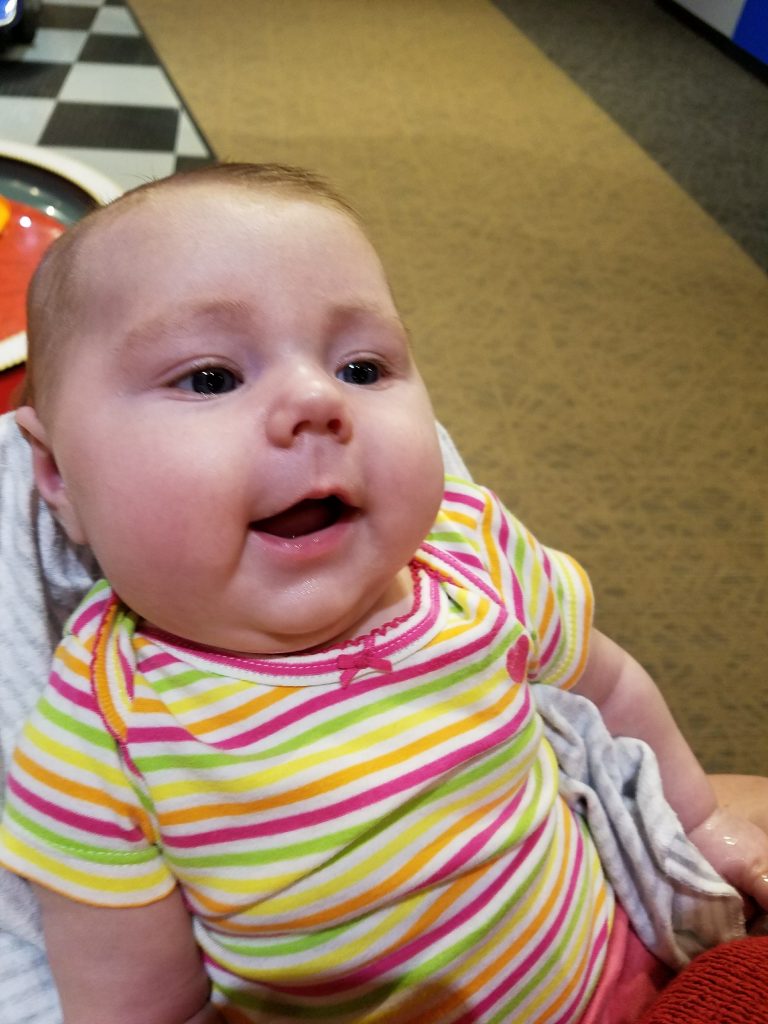 When I was the patient, all I knew was the sickness. I didn’t have the ability to see beyond my pain and fatigue. Now, on the other side, as the parent of a patient, I’ve seen just how cary it can get. Now, I understand.