Vegan = Forever the Most Annoying Person in a Restaurant - Uncover Ostomy
2157
single,single-post,postid-2157,single-format-standard,ajax_fade,page_not_loaded,,qode-title-hidden,qode-child-theme-ver-1.0.0,qode-theme-ver-10.0,wpb-js-composer js-comp-ver-4.12,vc_responsive

22 Sep Vegan = Forever the Most Annoying Person in a Restaurant

Posted at 21:52h in Uncategorised by Jessica Grossman 0 Comments
Share

Before you read, please be advised that I am not a doctor, a nutritionist, a nurse, or a fortune teller. I am merely expressing my own views and experiences, hoping to give you a new perspective on your life and your health. Before you make any monumental changes, please consult a physician.

It was about 3 years ago, now, when I decided to try something just for fun. I had just moved to New York City – a new country, a new apartment, a new life. It was scary.

What was scarier than my big move, however, was the fact that my stomach had been bothering me for months prior. I had gone to my gastroenterologist, and to my surprise, was informed that the stomach pain I was experiencing was in no way related to my Crohn’s Disease. He hadn’t the slightest idea why my stomach had been acting up.

Having been given a clean bill of health, supposedly, I made my move to start my life anew.

My new life began in my small 500sqft apartment, shared with a roommate. I knew her, but not well, and I wasn’t very into shmoozing much upon my arrival. I had already been given readings to do for my Master’s program, (the reason for my move,) so I spent a lot of time in my room, studying.

Background noise had always been imperative to my studies, so I immediately turned to Netflix. We had not yet gotten cable TV in our apartment (thank you Time Warner for your superb customer service), so for the first few weeks in NYC, I used the video streaming service as my study partner.

Scrolling through the choices (not as many back in 2011), I settled upon the documentary genre, focused on food. I had always been really into these types of movies (Super Size Me being one of my all-time faves), so I thought the available film list would suit my needs, perfectly.

A few days, and over 7 documentaries later, I was well-versed in the food producing ways of North America – It’s kind of gross… and the grossness got me thinking:

“Why not, just for fun, try being vegan. I mean, isn’t everyone in New York City vegan?”

So, I went grocery shopping and took the plunge, just for fun.

After a week of cutting out all meat, fish, milk, and eggs, the stomach problems I had been plagued with for months had suddenly all disappeared. I felt totally, unequivocally, 100% better.

Whether my stomach pain was, or wasn’t related to my Crohn’s, I will really never know. What I do know is that I suddenly felt better than I had felt in years.

Now, 3 years later, I am still that girl. 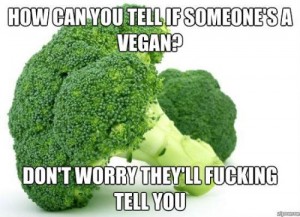 Yeah, no one likes vegans. All they ever do is ask about food. “What’s in this? What’s in that?” It’s annoying, right?

Ok, first of all, I am not one of those vegans. (Not like there is anything wrong with them…) I mean, I’m not one of those “animals are people too” type vegans who care about animal rights and all that. I wear fur, I have leather purses, and I used to believe that it was ok to eat meat because the animals were already dead and they would be dying in vain if we didn’t eat them.

No, I’m vegan because I don’t believe in how most animal products are processed and filled with chemicals and I don’t want them in my body.  I am vegan because after accidentally trying it out, I realized I couldn’t turn back.

Though, I respect anyone who is vegan, no matter the reason, because it is damn hard.

Either way, – I have always been that girl.

I never had a choice when it came to food selection- and many of you who suffer with the often debilitating Crohn’s and/or Colitis might know what I’m saying.

The first thing a GI doctor will tell you as soon as you’re diagnosed with Crohn’s or Colitis is that you immediately need to cut out a long list of different foods: nuts, seeds, certain fruits and veggies, popcorn…

Suddenly, you find yourself sifting through restaurant menus trying to find something that doesn’t have one of those things – and asking the server. Then, if you’re lucky, ending up with a meal that isn’t just soup broth.

For me, being sick with Crohn’s was what made it difficult to find food I could eat, more than being vegan ever has been.

No word of a lie, my mom used to PEEL STRAWBERRIES for me because they had seeds I couldn’t eat (a gem, right? love her.) I also used to have to sneak potato chips into a movie theatre because I couldn’t enjoy the buttery movie snack of the ages due to the hard kernels. I was also that girl who had to bring a dietary restriction list with her on school field trips.

I have pretty much always been that girl.

At least now, I can eat.

I went from a semi restricted diet, to a meal replacement shake only diet, to eventually nothing but a permanent IV in my arm as my source of nutrition because my intestines couldn’t handle any food at all.

They say that, after 3 years, your body will tell you whether or not you can handle such a tough diet. I am not going to lie, there have been a few struggles. I had to spend time learning what was considered vegan, researching protein substitutes, and experimenting with adjusting meals to fit my ostomy, (after all, even with an ostomy, I can’t eat every vegetable or every nut all the time.) But it has been worth it. Having had numerous blood tests to prove that my nutrition levels are healthy, having had more energy than I can ever remember having, and barely being sick at all (a random flare up that lasted less than a few months), I know that I made the right choice.

Will I remain this way forever? Maybe. Maybe not. All I know is that I want to eat however way my body needs me to, and right now that means being vegan. I will do anything not to end back in a hospital bed, in pain, with an IV drip in my arm.

So, to all those who think this: 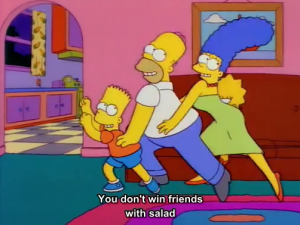 I’ll save these delicious, vegan meals for myself.