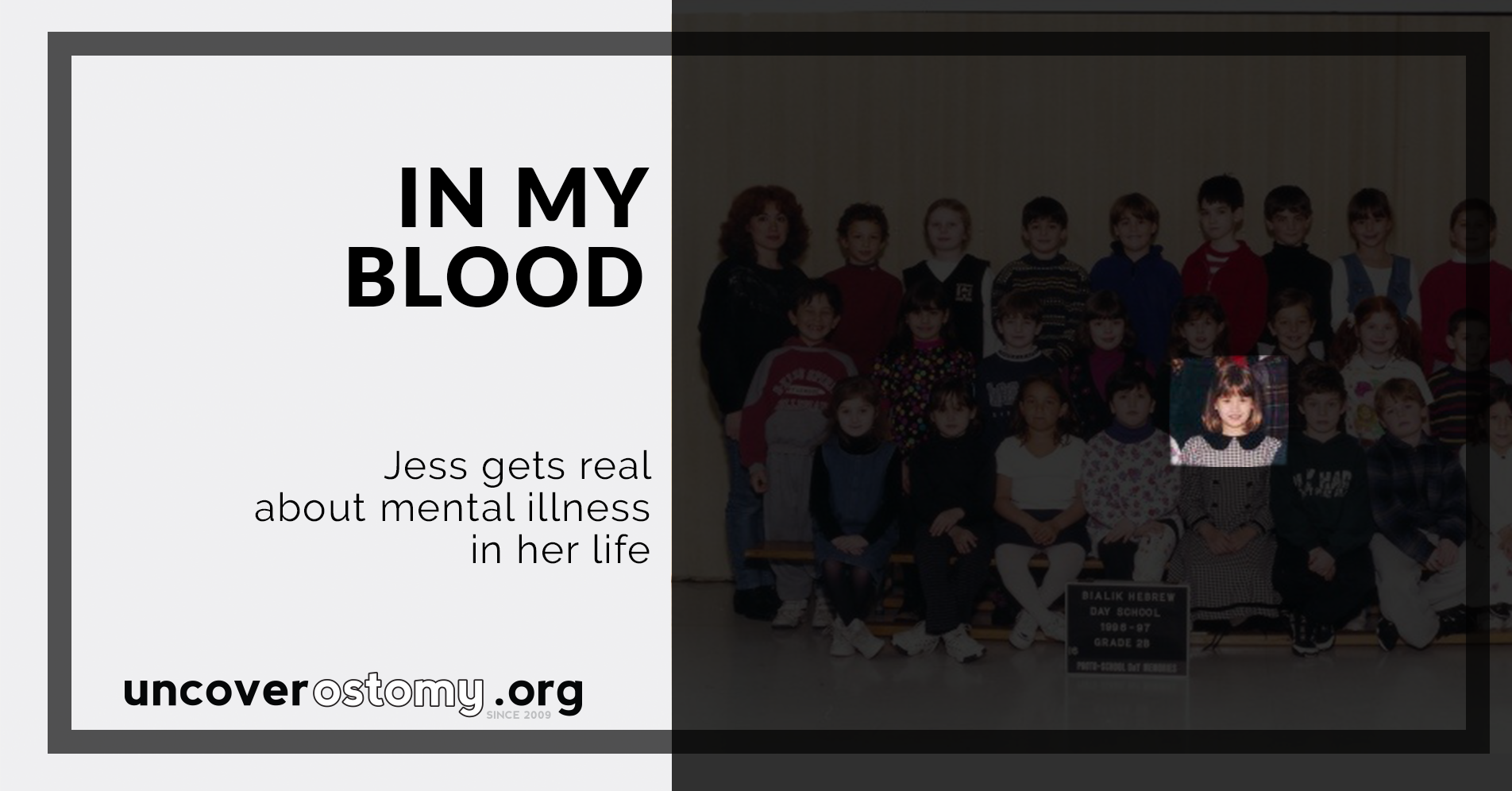 I only recently found out that my maternal grandmother committed suicide when my mom was 4.

By recently, I mean less than a year ago.

I was with my mom and aunt and a distant great-uncle that I hadn’t seen in years, and they were going through old albums. Casually flipping through photos of my grandmother, trying to find the resemblance that everyone always tells me I have with her, it was said.

I can’t remember now how it came up, as it’s all a blur, but I clearly remember the flippancy with which it had been.

“Yeah, she died from an overdose. Didn’t we tell you?”

Growing up, I had always been told it was from breast cancer.

The matter-of-factness of the statement felt like a hot knife in my throat. Sure, it had been old news to my family and something that they had already dealt with, but this was the first I was hearing that my grandmother committed suicide. It seemed like one of those “facts of life” things that I was just supposed to know, you know, like how the tooth fairy isn’t real – you just sort of figure it out.

Maybe they had just forgotten to tell me.

I left that little get together and thought about what I had learned. I thought about it for a while because I knew it meant something specific to me.

I had spent years worrying that I was predisposed to breast cancer when in reality, it was mental illness that ran through the family blood. Knowing this, I wondered if there was more than just a resemblance that I had in common with my late grandmother.

It’s no secret that I had a hard childhood. I was picked on by all of my peers and had very few friends, I was, as we all know, very ill, but I also had a really rough home life. No sexual abuse, or anything as insidious as that, but a lot of mistakes were made.

It’s probably one of the few things that I don’t open up about, and we all know I open up about a lot.  I’m still not ready, and maybe never will be ready to really talk about what life under my family’s roof was like, but it’s not something I can ignore. I’ve only just started thinking about that part of my life again because recent events with my family have brought painful memories back up to the surface.

Pair that with the news of Kate Spade, Anthony Bourdain, and Inés Zorreguieta‘s suicides, I knew I needed to, at the very least, talk about what I’ve been through: both for my own well-being (as writing is very therapeutic for me) but also to share a perspective from someone who has been there and is still here to talk about it.

You may automatically think that, because of my Crohn’s Disease, it was only natural that I thought about ending it, and you wouldn’t be entirely wrong. Spending night after night in bed, rocking back and forth in excruciating pain, and being unable to sleep will bring about a certain delirium that can trigger unhealthy thoughts. So can spending half of your mostly waking hours on the toilet, without anything to do but think about how awful a life like this is. I definitely remember writing long, long diary entries that talk about the physical pain inside me that wouldn’t go away.

But I also have old diary entries that go beyond the physical pain and talk about the mental. I have entries where I write about feeling unloved from those around me, where I feel like I have nowhere to turn, and that there is an emptiness inside me that I can’t quite explain. I write about wanting to end it all.

Thinking about this after hearing about my late grandmother, I questioned if Crohn’s was the only reason for these thoughts, or, perhaps, it was in my blood all along.

Then I caught myself thinking… if I didn’t have Crohn’s Disease as a kid, would I still have had suicidal thoughts?

I was diagnosed with Crohn’s Disease at 9 years-old, but I didn’t really start writing in my diary until I was about 10, and I remember writing in it until I was at least 15.

When I started writing in my diary, there really was no Internet that I could easily pull up on a device and look to Google or YouTube for help with what I was going through. There weren’t any television shows highlighting the help that’s out there for mental illness. There also wasn’t social media full of people ready and willing to talk about mental illness. There also wasn’t an easy way for me to message someone asking for help – to be honest, even if there was at that time, who would I have gone to at 10 years-old with no friends and feeling like I didn’t have a family who cared about me?

They say that mental illness isn’t quite genetic (at least, that’s what I’ve read as of late), but that there is a chance of predisposition. Looking back on my childhood, I am not really sure whether the suicidal thoughts I had were a product of my family history, or from the way I was treated by those around me, or from the pain of my Crohn’s Disease ripping my insides to shreds. Maybe it was a combination of all those things.

However, I know for a fact sickness wasn’t the only reason for those thoughts.

After I had ostomy surgery and after I had found myself healthy and functioning like a normal human being, the thoughts had gone away. I was too busy with university, with a sorority, with dating and partying, with working part-time jobs, and actually having friends, to have those thoughts. It was great.

And then my dad died.

I was, of course, devastated. The father who had raised me to the age of 19 was suddenly gone. Of course I was upset, emotional, sad. I loved him just like he loved me.

But there was more.

Part of me thought that I wasn’t as sad as I should have been. Part of me started to let thoughts creep in that questioned my sadness. Something inside me starting to think… well, maybe, this was due.

And these thoughts in my head made me spiral.

How could I think this about my own father? How selfish was I for even thinking something like this for a second? What kind of horrible person was I?

Maybe I deserved to die, too.

And suddenly, before I knew it, they were back… and I knew I needed to do something about it.

At 19, with a more established support group of friends and peers, with the Internet at my disposal to research and read, and simply being more mature, I had the tools and the capacity to make a change and I knew had to speak to someone. It took me a few months, but I found a therapist and I spoke to them about my feelings. Within a few weeks, the thoughts went away and haven’t been back since.

Lucky that I had the right people around me this time.

Lucky that I had the resources I needed.

Lucky that there was something inside me that wouldn’t stand for me being this way.

Maybe it was maturity. Maybe it was finally being out on my own. Maybe it was the small bit of confidence in myself that I had never had before that spoke louder in my head than the negative thoughts.

Maybe you’ve read this far and you’re thinking – “wow, Jessica, this is really dark and honestly, horrible. How could you think that way about your father? No wonder you were depressed!” Or maybe you’re thinking – “Jessica, I didn’t know this about your childhood and that’s shocking to me.”

Honestly, I don’t know what you’re thinking right this second, but I am hoping that I can point you in the direction of thinking that I intended when writing this blog post:  I want you all to remember that you never really know what someone is going through.

You don’t know if they have no friends or family to support them and they feel lost, or if they have tons of people around them but they don’t feel like they connect with them.

You don’t know if they are in pain physically from a disease that is literally tearing apart their insides, or whether or not they are just in mental pain that they can’t express and choose not to show.

You don’t know anything about anyone more than what they tell you, but that shouldn’t matter.

It is your duty as a human being to treat them with respect and kindness, first, no matter what.

My Crohn’s Disease is in remission, I am so thankful to have an ostomy, I have amazing people whom I’ve chosen to be around me, and I make sure I don’t let any unwanted negativity into my life.

As a full-fledged adult, I am curating the life that I need to be happy.

Does that mean my thoughts may never come back? Not necessarily. After all, it’s in my blood.

Does that mean I have to let those feelings back in? No. After all, I’ve made it this far.

If you or someone you know needs to speak to someone about their mental health, please do at least one of the following things:

1 . If you’re struggling, try and reach out to the person you trust most to let them know how you’re feeling or if you think someone else may be struggling, make sure you even subtly let them you know you are there to talk to them without judgement if they ever need it.

2. Use the resources as your disposal such as a crisis hotline like these: Canada & US.

3. If you feel you need to talk to someone specifically about dealing with IBD, other health issues, or living life with an ostomy, we are always here for you. Send us a private message through our Facebook page. Jess will be on the other end.