It's Time to Stop Showing Off Your Ostomy | 10 Years of Uncover Ostomy - Uncover Ostomy
17659
single,single-post,postid-17659,single-format-video,ajax_fade,page_not_loaded,,qode-title-hidden,qode-child-theme-ver-1.0.0,qode-theme-ver-10.0,wpb-js-composer js-comp-ver-4.12,vc_responsive

It’s been 10 years of Uncover Ostomy, and you know I had to do it big. I may be controversial, but that’s what got us here.

Below is the transcript of the video above! You can also find the video on Facebook.

Hey, I’m Jess, Founder & spokesperson for Uncover Ostomy and today, on our 10 year anniversary, I have an important message for you:

It’s time to STOP SHOWING OFF YOUR OSTOMY

Yeah, you heard me. It’s time to stop showing it off.

And so have you.

Together, we’ve come to accept ourselves, and we’ve made the ostomy known. From social media posts to news articles to companies showcasing people with stomas, the word “ostomy” has become better understood and incorporated into every day terminology.

That being said, we’ve done a great job at highlighting what makes us different.

But I don’t want to be different.

And neither are you.

We’re normal, every day people, who just happen to have to use the bathroom in a “unique way”. Other than that, we’re just like everyone else. Of course, the difficult journeys we’ve each been on to end up at ostomy surgery are what make us special, but after surgery, we just live our lives, with a few subtle adjustments.

I feel like we’ve lost that. We’ve done such a great job at setting ourselves apart from the crowd, but we’ve put ourselves in category of people with different needs.

And it’s time to stop that.

When I started Uncover Ostomy and blogging about my life, I didn’t go into the ins and outs of what living with an ostomy was like. Sure, it was included, but the main points of my blogs had nothing to do with that.

I whined about having to study for my university courses, I vented about the terrible guys I dated, I got excited over going to frat parties, and I basically wrote about living life as a young adult who just so happened to have an ostomy.

I realized this past year, that while my blogs always had the subtle hint of ostomy, my photos didn’t. They always showed off my bag, called attention to it, and made it the focal point. These photos are part of the reason for bringing the ostomy to the forefront and that’s important, but it never quite fit with what how I wrote about, or even lived my life.

So, today, on the 10 year anniversary of Uncover Ostomy, that’s going to change.

For me and for this movement, it’s no longer about flashing the bag. I mean, how times have you seen someone else flash their butt? Hopefully, not a lot.

For me and this movement, it’s about living normally with an ostomy, as if it wasn’t such a big deal. Because it’s not. 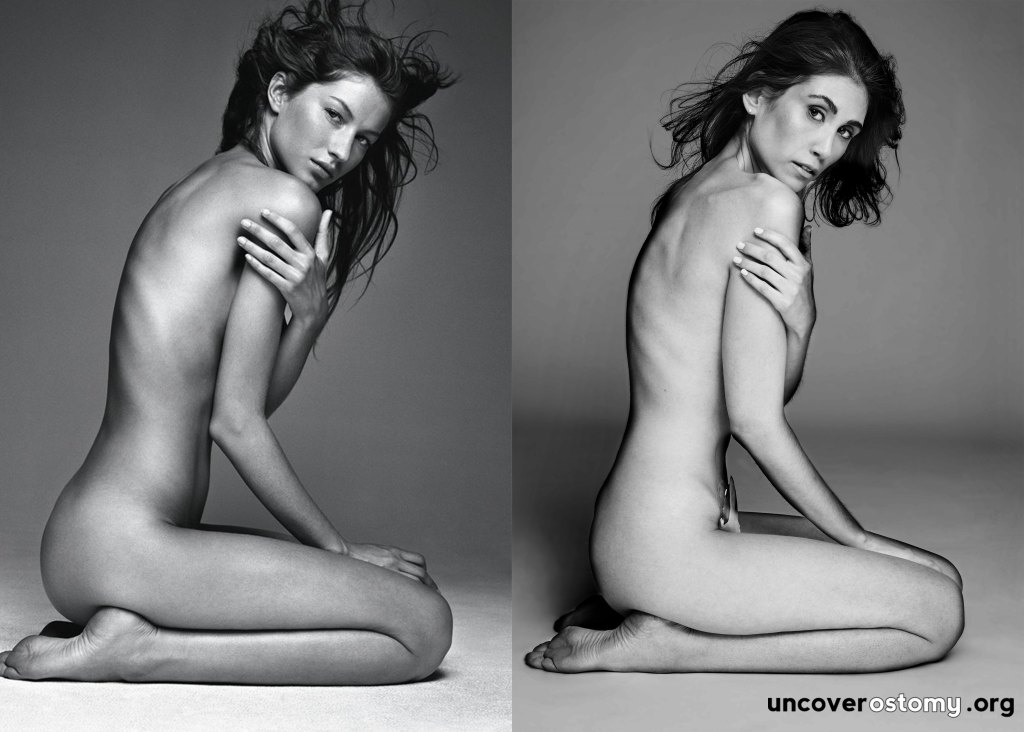 If you aren’t paying attention to the ostomy, you almost miss it.

And that’s the point.

We’re 10 years in, and man have we come a long way. Showing off our ostomies got us here to the point of recognition, there’s no denying that, and that’s amazing. But now that we’ve been heard, it’s time to shift the conversation.

Don’t stop talking about your ostomy.

Don’t stop teaching people about how it’s saved your life.

But maybe stop voluntarily showing people where you shit from.

Instead, show them how awesome you are as a whole.

That’s what these photos are meant to represent and this is the message I want to take forward.

I hope you’ll join me.

Because it’s time to stop showing off your ostomy.

It’s time to start showing off you.

Sign up and wait for an email in your inbox with a survey! Fill out that survey, and your story may be chosen to shape the future of ostomy awareness and education.