Whenever I talk about my life as a whole – you know, the general biography of me – I usually describe it with one word:

All of us, at one point, especially those who have dealt with Crohn’s, Colitis, Cancer, or whatever other hardships we’ve faced, we feel that our lives don’t make sense. The pain we’ve dealt with, the uncomfortable treatments we’ve been exposed to, and the changes we’ve experienced – looking back, it all seems so.. ridiculous.

For me, the ridiculous started when I was diagnosed with Crohn’s at 9 years old. Most of you already know my story, but for those who don’t, my disease got really bad when I was 11, and I was taken to the emergency room with a hemaglobin of 55 (for a normal kid my age at the time, it’s 120) because I was close to death. I couldn’t move or open my eyes, and I almost couldn’t breathe. Luckily, after 2 years of being in and out of the hospital, hovering just over the line of life and death, as the story goes, I made it out alive, thanks to ostomy surgery.

Now, you’d think for only having lived to the age of 13 that this would have been enough ridiculousness for anyone in a lifetime.

But of course, not for me.

Besides being a sufficiently awkward child from years of isolation in the hospital and being overweight from steroids, high school was pretty difficult. I was lucky enough to make it out with a few great friends, and somehow, a personality.

Thanks to my newfound personality, I was hired by Abercrombie & Fitch – the most prejudice company in existence. Oh, except, I wasn’t hired because of my bubbly attitude, but because they thought I was Asian. They had a “minority quota” they needed to fill and they thought I was half. (For the record, I am not)

That’s where I met my first first boyfriend. Turns out this guy had been dating his girlfriend for a year, while he was dating me.

I obviously didn’t learn much about men, because after joining my sorority in my first year of university, I surrounded myself with a ton of assholes. One of which, kept trying to convince me to date him. I didn’t – and good thing too – because he was actually in a relationship with another girl. And, his ex-girlfriend (now a prominent woman in tech in Toronto, haaaa) and her sorority sisters would call me and harass me because I was hanging out with him.

Oh yeah, that girl he was actually dating? She was the stewardess on my empty flight from Vancouver to Toronto a few years later. Sufficiently awkward – especially when she asked me how I had been. We had never met in person. But she knew who I was.

Then my grandmother died. Which I guess isn’t too ridiculous, because she was older, and an avid smoker. Still sucked, though.

Anyway, I had gotten fed up with men, and decided the next best option was to date my best guy friend – who had been chasing me for 2 years. The beginning of our relationship was pretty much out of an 80’s movie (Read: Pretty in Pink, Andie and Duckie.) He did everything for me, from letting me cry on his shoulder because of other guys, to dragging me to the hospital when I had a cold.

That, somehow, triggered my best friend turned boyfriend to turn into an absolute nutcase. He’d break up with me every 2 weeks because he “loved me too much” or because he “didn’t love me anymore,” then he would come to my window in the middle of the night and throw rocks at it to get my attention…just to cry on my shoulder and tell me he didn’t deserve me. When he wasn’t breaking up with me?  He was proposing to me. He did 3 times. 2 years of breaking up, getting back together, and angry drunken emails and texts later, I eventually dumped his ass and told him never to speak to me again when I found out he was talking to other girls.  Apparently, dating your best friend doesn’t really mean anything.

In the middle of those 2 years, I met another guy who, within the first few nights of knowing me, expressed his undying love. I was taken, so I couldn’t date him, but he was… well, let’s say, “on my hook.” Think, How I Met Your Mother:

Eventually, after I was done with my ex-boyfriend, we ended up dating, but only for 2 weeks. We stopped because a mutual friend of ours was extremely upset that we were, as she had always liked him. So we broke up. He was supposed to go to law school in Australia, anyway. However, a few months later, I ran into this guy at our mutual friend’s cottage. He expressed how he didn’t want to go to law school so he could be with me. And that was that.

We dated for an amazing few months before I moved to Manhattan for school. We stayed together long-distance and, somehow, made it through.

Surprise! While I was in Manhattan, I had to have 3 minor surgeries, you know, because of course my body needed to fail while in a country without universal healthcare.

I eventually made it back to Canada to move in with this boyfriend. It made sense at the time. Turns out, this boyfriend was not who I expected. In fact, he was a totally and completely different person (Read: an angry narcissist who treated me worse than the dirt under his feet.) I broke up with him 4 months later.

To take my mind off of that whole situation, and to give me something else to do while living with my mother again, I started working on a startup business with a developer who was brilliantly talented. Unfortunately, after devoting all of my waking hours to the business, I found out that he was absolutely insane. He thought that me – a woman – was only meant to take his orders, be his puppet, and work as his servant. We had to end the working relationship and he wasn’t too happy about it… which, was clearly stated in the 2 weeks of  threatening and absolutely psychotic emails he sent that called me names and said that “the devil was going to get me.”

Eventually, life started to even itself out as I made my way to Jamaica for one of my best friends’ weddings, this past February.

And that’s where I met Jake Gyllenhaal.

The lookalike’s name was Matt, and he was in the airport sitting a few rows down from my friends and I, while we all waited for our flight.

[Sidenote: I do this thing where I see if there are any interesting looking guys and see if they could possibly entertain me for the week of vacation. I wasn’t sure if he was going to be staying at the same resort, but in the meantime, he was pretty to look at.]

Luckily, he was staying at the same resort. It turns out, as I learned when he approached me the first night there, that he was from London, ON (where I used to go to university, and where my brother and cousins still did.) Apparently, he also used to live with the older brother of a guy I went to high school with. I had a great time with him and his friends that week and was a little sad when the week came to a close. After all, what happens on vacation, stays on vacation, right?

Apparently, not. While we collected our luggage in the airport back in Canada, Matt asked for my number. Coincidentally, I had already planned to be in London that very weekend, to see my brother and cousins. And I thought he should know.

So I visited him that weekend.

And then I visited him again, shortly after.

And then he visited me.

And somehow, we ended up meeting up every weekend for 3 months. And it was wonderful.

But I knew, having done the long-distance thing before, it wasn’t something I wanted to do for very much longer. No matter how amazing Matt was – and amazing he really, really was.

So one weekend, we’re at my friend’s cottage and he gets a call from an old roommate-friend of his.

He had bought a house. In Toronto. 2 blocks from me.

And he needed another roommate.

This weekend, Matt moves to Toronto.

While most of what I call the “ridiculous” parts of my life have often made me sad, upset, lonely, and angry… this, by far, is making up for all of it.

The reason I went on this long-winded rant is to clearly illustrate that no matter how hopeless, how awful, how inconceivably ridiculous your life seems, it is important to remember that ridiculous has two sides. The really bad, and the really good.

You could be sitting in a hospital bed, staring at the ceiling, wondering if you are going to make it through the next day. You could be looking at your changed body in the mirror, wondering if you’ll ever feel normal again. Or you could be thinking of people past and wondering how they ever treated you in that way. I know I did.

But I also now know that you just have to make it through one side to get to the other.

I was not only sad that I couldn’t make it into the city to accept in person, but I was even more upset that I could barely be a part of the event because of the failure of technology.

Until I looked over at Matt, who made a stupid joke, just to make me smile.

And suddenly, all that seemed ridiculous to me, didn’t seem so ridiculous anymore. 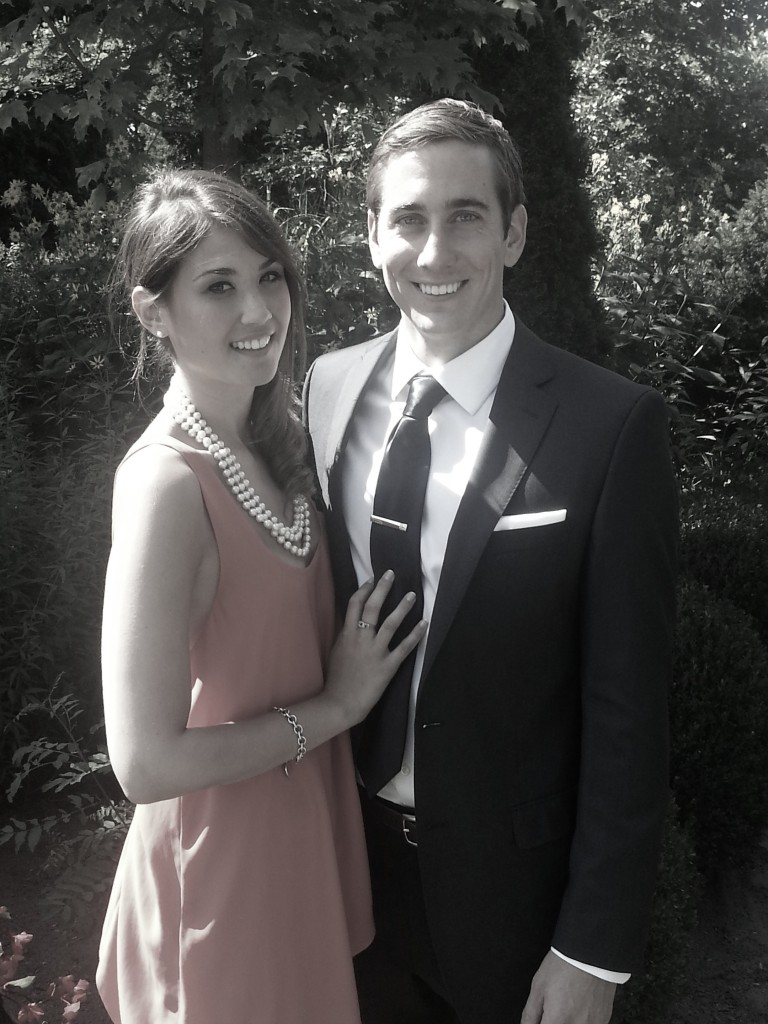