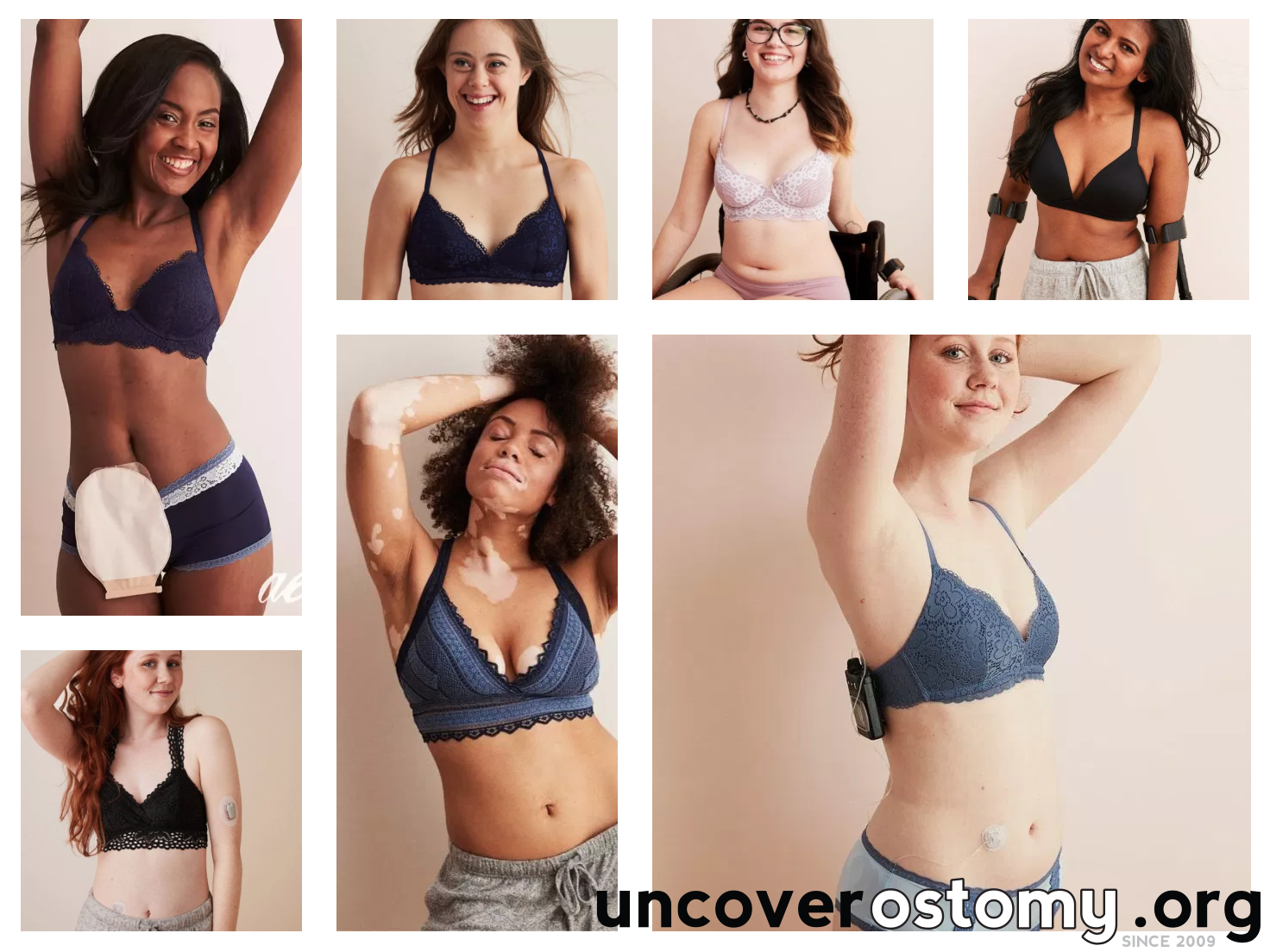 Anytime even the smallest ostomy related thing hits the news, at least 5 people make sure I’m aware, but that’s usually already after my FB newsfeed blows up because of my ostomy friends sharing it. I mean, after all, it is my job to know about this stuff, right? (And thank you to everyone who keeps me updated!) Well, this week, if you haven’t already heard, there was some new ostomy buzz.

This week, the buzz was all about the Aerie brand, a subsidiary of American Eagle and the newest photo set in their #ArieREAL theme. The Aerie theme for the last little bit has been to use “real” models with no retouching. Their website has the slogan: “Girl power. Body positivity. No retouching.” I dig it.

I dug it even more when I saw that their latest batch of campaign photos featured an ostomy!

What? Since when does ANY major brand include someone with an ostomy? This. is. HUGE. 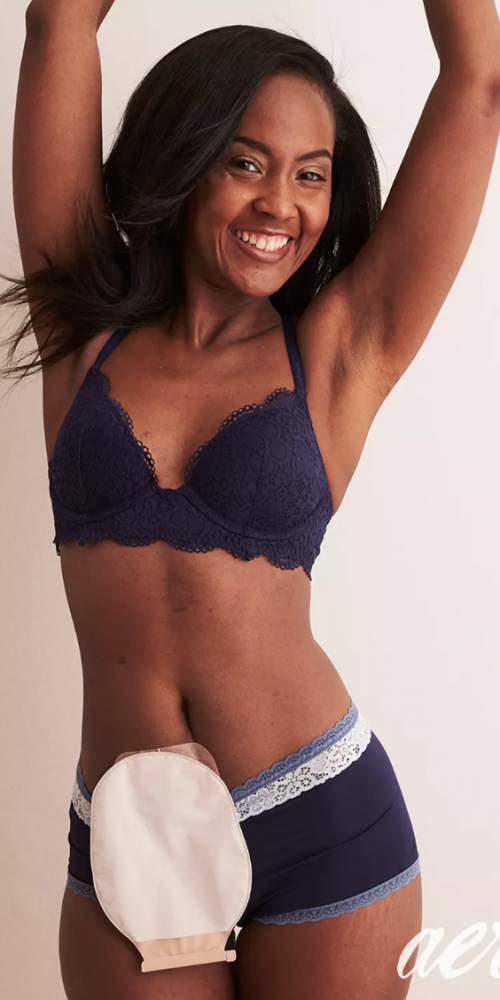 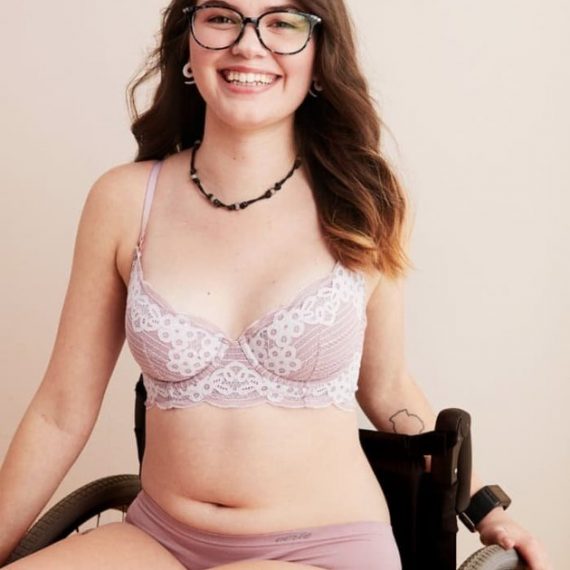 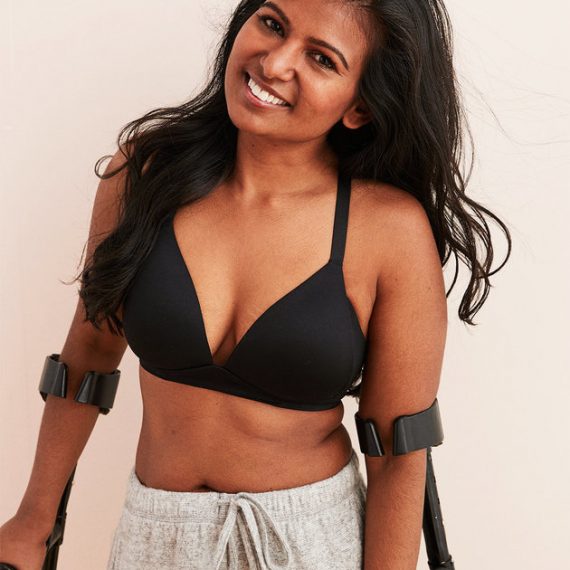 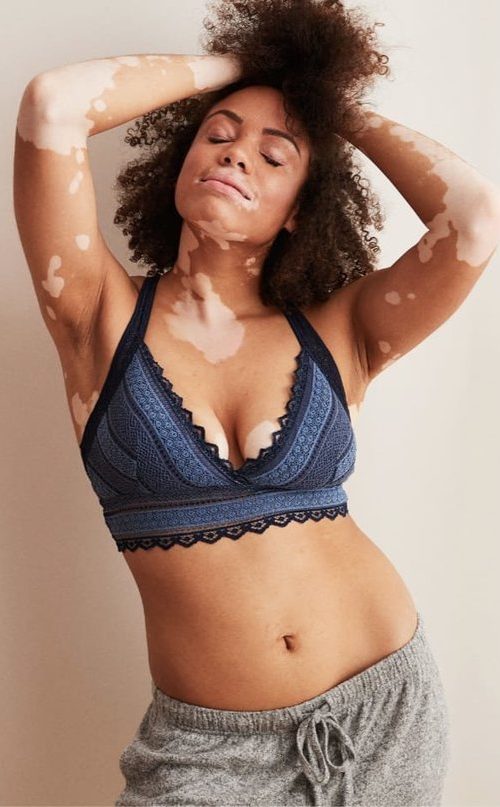 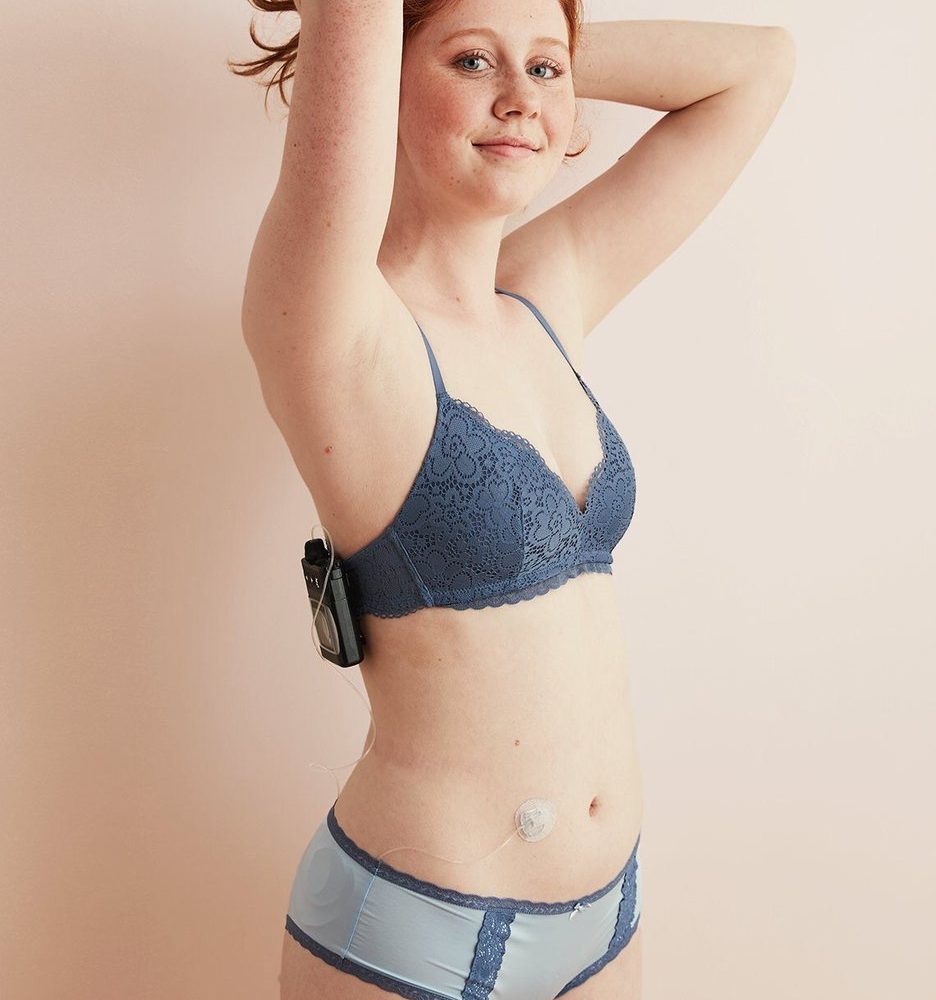 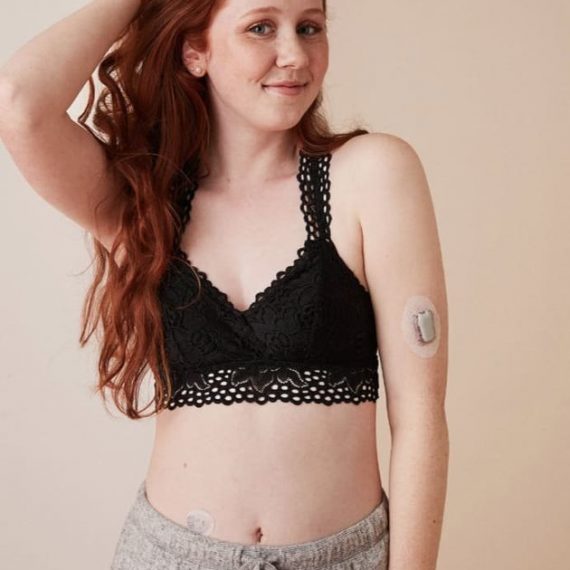 It wasn’t until I started diving into this campaign to gather information for this very post that I started to come to a realization that dimmed the excitement I had originally felt for this effort.

Ok, so before you start thinking “here we go, Jessica has an opinion that’s going to ruin this whole thing,” please hear me out.

First of all, the sheer fact that an ostomy was included in any major initiative is ground breaking. It’s been almost 10 years since I started Uncover Ostomy, and the Jess from back then would never have imagined that this would be a thing. Hell, the Jess of right now is still amazed even with knowing how far we’ve come in those almost 10 years.

And no, this isn’t me being like “this should have been me,” either, because last time I was chosen for a US based contest, I was told that since I wasn’t a US resident (even when I was LIVING in New York), that there was nothing they could do but revoke the prize I had won of being on a Time Square billboard. Yes, back in 2011, I won a spot to model my ostomy on a billboard in freaking Time Square! It was heartbreaking to have it taken away because of my citizenship and that’s why I don’t do these things anymore. (So you go get ’em you Americans!)

It wasn’t until I started preparing this blog post to shout out to this campaign that I actually started to analyze and think about this campaign as a whole. What struck me first was simply, how hard it was to actually find the photos of these amazing women anywhere but a news source. Sure, they were all over the place, but I didn’t actually see them… coming from Aerie? So I went to the #AerieReal website and they were nowhere to be found: 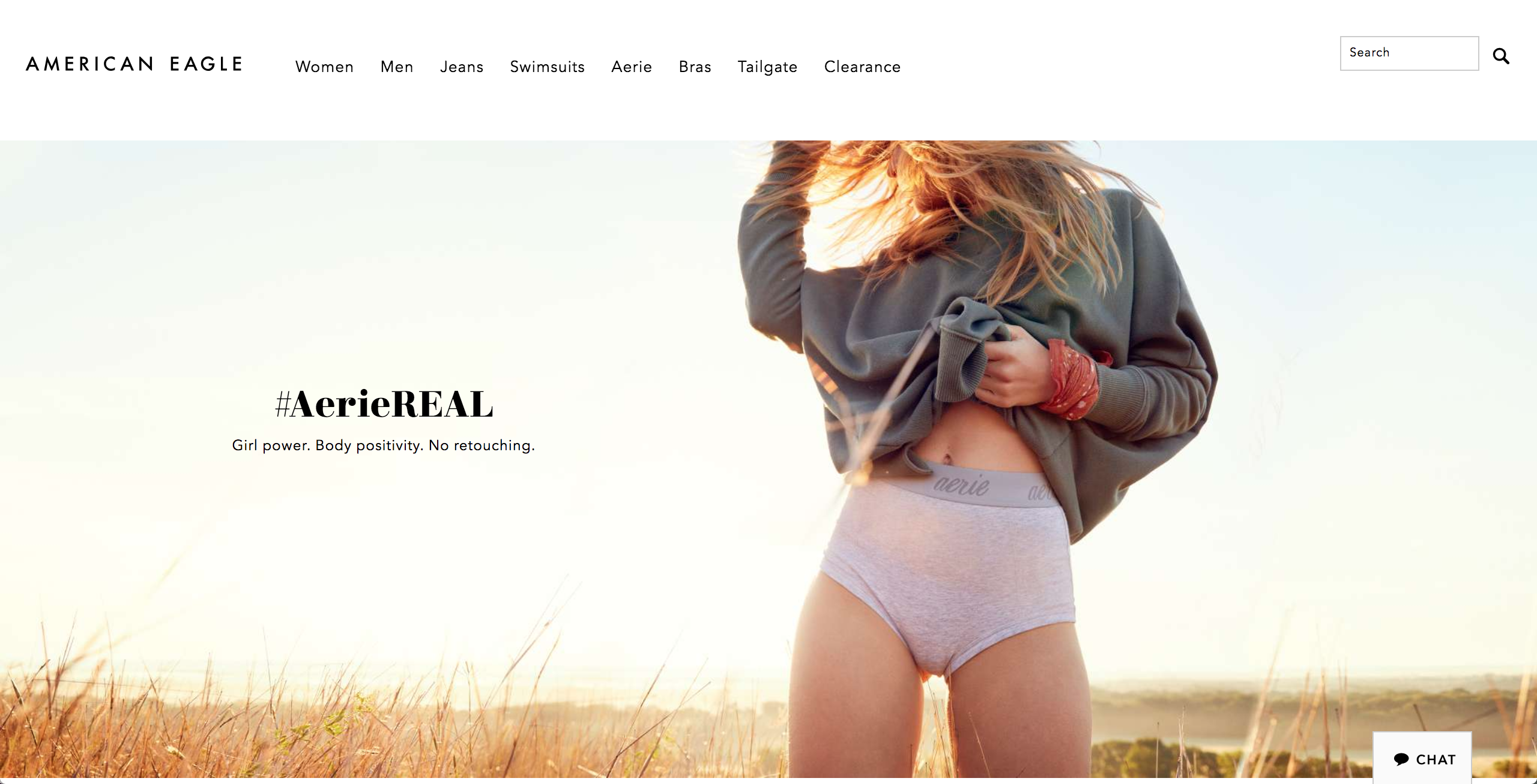 Ok, benefit of the doubt here – they just launched the campaign, so maybe they haven’t had a chance to update it yet… fine.

So then I go to their aerie blog, because, you know, when writing, you should really credit the source! Yet, I got to the blog, and their most recent blog post was from today (July 13th!) but it does not mention anything about this campaign. Ok, that’s a bit weird… Especially since they have written about the “real” campaign, even if the post is from 2014. (Maybe there’s a more recent one, but I didn’t find it.)

I did see a few people post screenshots of these women being featured in some of the product pages on their online shop, but they were still hard to find… Odd..

Wait, these photos aren’t even on their own blue check mark verified social media pages. Go look, they aren’t there.

After spending more time trying to dig around to find things to include in this post, I started really asking myself:

Why are these photos so hard to find on Aerie’s own platforms?

If these photos were barely even on their own branded platforms, why were they even released?

Well, here’s your marketing professional insight of the day: they did it to go viral.

As the owner of a marketing agency, the phrase I’ve heard more times than I can count is “what can we do to go viral?” It’s the holy grail of marketing success and it’s something I’ve even been a part of (#selfieshoes anyone?) so I know how much a viral campaign can boost a brand. Some brands will even do whatever it takes to get there. Even leverage medical “differences” to do that.

I never post a reaction to anything without taking the time to think things through, without bouncing ideas off of some trusted sources, and without doing research. After doing all of these things before writing this post, I landed on a feeling of, let’s say… uneasy-ness with it all.

Again, the fact that the ostomy is included in any major brand’s marketing efforts is ah-mazing, but after really stepping back and giving this campaign a good hard look, it begins to feel extremely inauthentic.

One of the major points that began to stuck out after realizing how hard it was to actually find these photos was the fact that these photos were in a self-contained series, described as including “people with disabilities and chronic illnesses.” Doesn’t that seem a bit… weird? 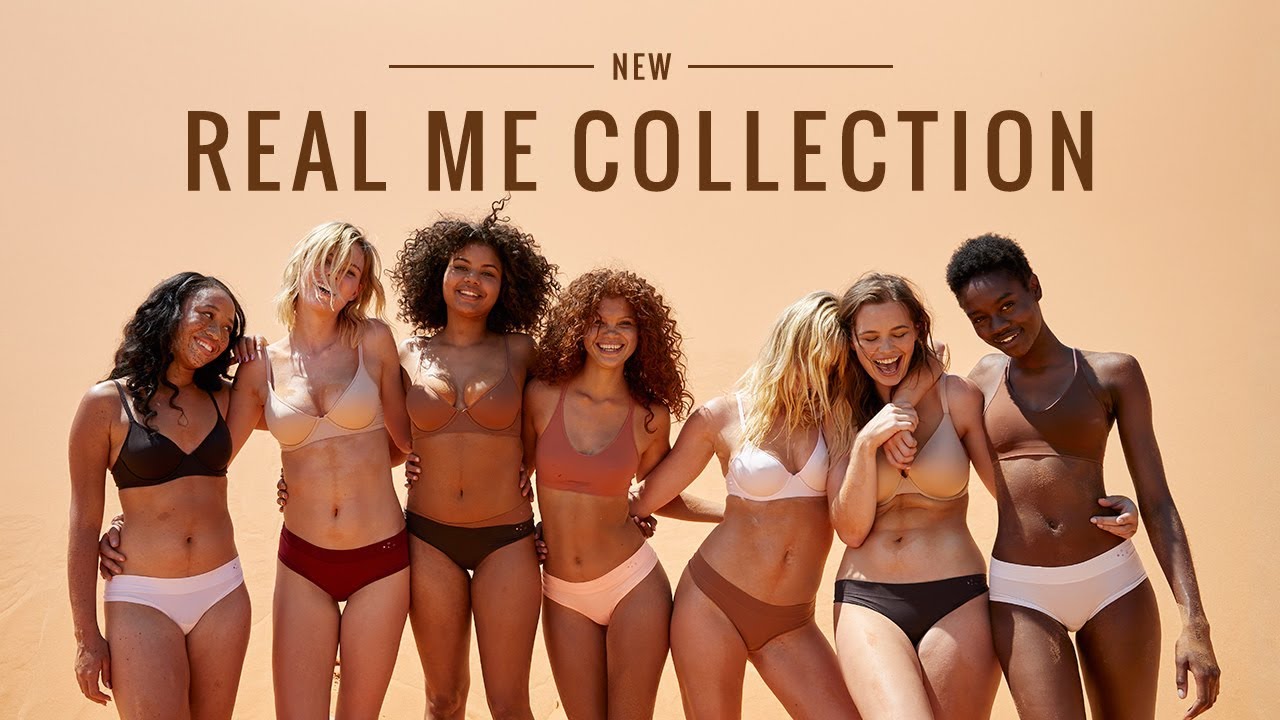 Most of Aerie’s other photos are of “real” yet “normal” people. Different shapes, different sizes, difference ethnicities, but all the same level of… health? Yet here is a campaign focused solely on those with “medical differences” bucketed into their own grouping.

These women may be “real,” but doesn’t it feel like Aerie doesn’t want to show them to be as real as the rest of the “healthy” models?

If you remember way back a few years ago, I did a photoshoot with Knixwear, which is another underwear brand. Their campaign at the time was “every body has a story,” which was to highlight different bodies and what they’ve been through. What I LOVED about being a part of that campaign was that it included women of all shapes, sizes, and ethnicities, but it also included those with medical differences within that same campaign (way more people than just me!) We were all different, but we were all “real” together.

That time I posed for @knixwear and am now in their insta ads 😝. #tbt #model #modeling #lingerie #ostomy #ileostomy

This Aerie campaign? These medical differences were in their own series.

The photos would have probably gone just as viral if they had included these women with all the “normal” “real” models. (Virality is mostly dependant on your level of brand awareness and your PR, which Aerie has.) There was really no need to group them separately. These women didn’t need to be made out as “others.” They are just as real as the rest of those “real” models.

After spending all this time researching and thinking, I brought my thoughts to others, just to see how they reacted to the campaign. Kaitlyn told me that she immediately jumped to share it because of how exciting it was to see an ostomy being featured, but after she, too, had a chance to really look at it, she felt there was a negative connotation to grouping these women together this way. Brandon understood our viewpoints but gave us his usual devil’s advocate and said that, at the end of the day, getting the ostomy out there was a good thing. I also spoke to my team at In Social (with one team member who is diabetic) and they saw exactly what I saw – maybe, again, that’s our marketing eye, but I knew from talking to them that I at least wasn’t overthinking it.

I want to make it clear that each and every one of these women in the campaign are so brave, so special, and they have my utmost respect. None of the negative feelings that I have about this campaign are about them. They are directed towards those in charge of running a campaign like this – those who most likely cared more about “going viral” than really trying to spread a message of acceptance.

This is truly a step in the right direction, and now all we need is to take it just that one extra step further.

Aerie, I do hope you continue to do this, to commit to this message, and truly push acceptance of all body types, whatever they may be.

Sorry, the comment form is closed at this time.