No One Cares About You - Uncover Ostomy
17535
single,single-post,postid-17535,single-format-standard,ajax_fade,page_not_loaded,,qode-title-hidden,qode-child-theme-ver-1.0.0,qode-theme-ver-10.0,wpb-js-composer js-comp-ver-4.12,vc_responsive 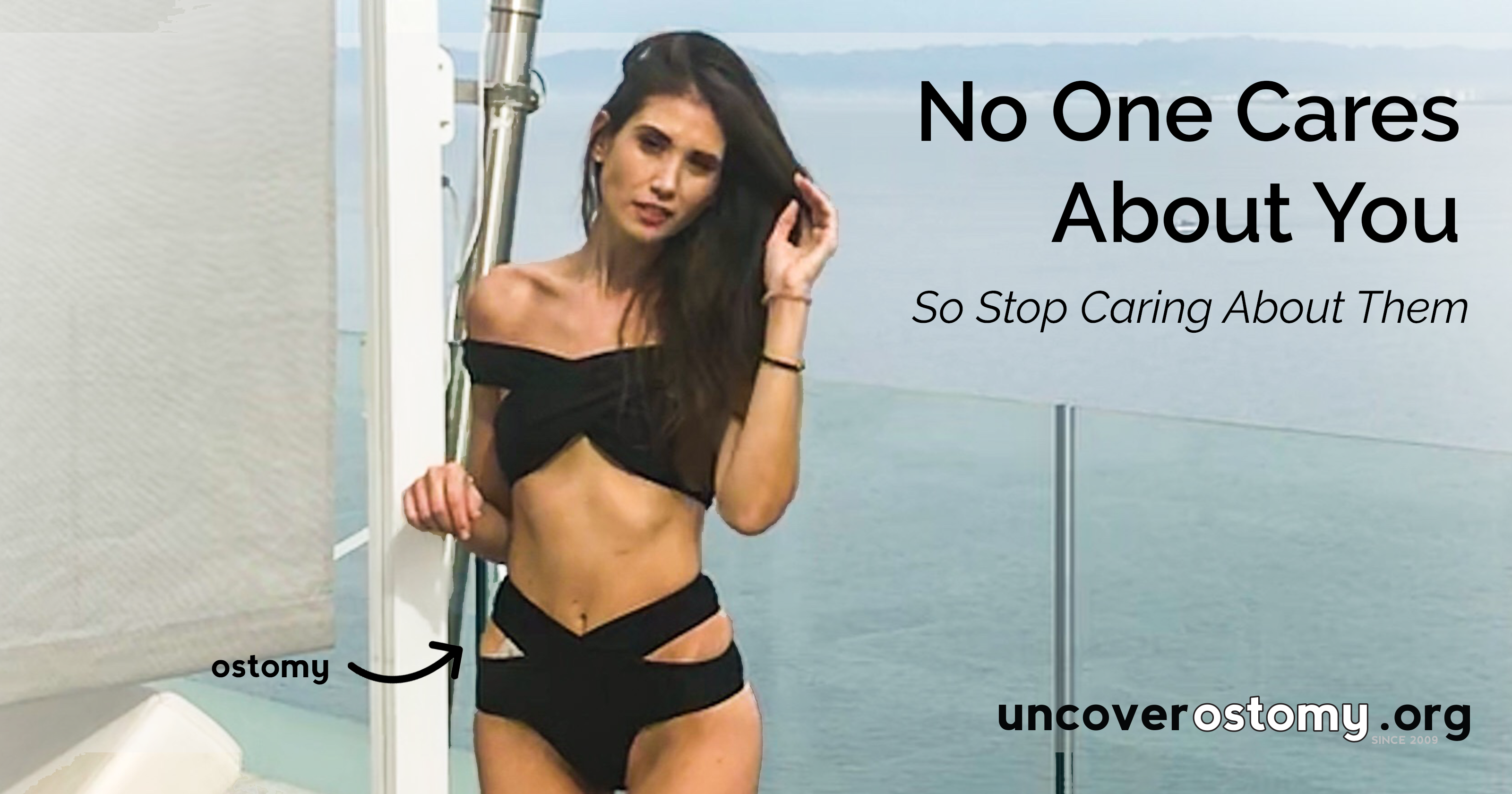 13 Jan No One Cares About You

Yesterday was the official day that people gave up on their New Year’s resolutions.

Are you one of those people? It’s ok, you can tell me – I’m not here to judge.

What I am here to do is give you a different one. A new, New Year’s resolution that you can actually keep. One that will make your life infinitely better.

What is this resolution I speak of? I’ll tell you in a minute, but first, I actually want to share a quote that I recently heard, which I have begun using as my own daily affirmation:

You’ll worry a lot less about what people think of you when you realize how seldom they do.

This quote, which the internet has told me about 10 different people have said (I think Olin Miler was the OG, but it’s fuzzy), means that people do not care about you. Well, that’s what it means to me.

If you think about it, the majority of the world and all the billions of people in it are too consumed by their own daily issues, stresses, and goals that they do not care who you are or what you are doing.

Let that sink into your brain for a minute. Then, say this to yourself 3 times:

No one cares about me.

Now, step back and say this:

…Except the few people whom I love and who love me back.

How do you feel?

After reminding myself of this over the past few weeks, I feel amazing… and it was a much needed feeling. I’ll tell you why I made you do that in a few.

At the end of 2018, it became extremely evident how self-centred and unethical people can be and how little they cared about me (or anyone). This realization was not only a shock to me, but it shocked my system. I have seen people do some pretty awful things, but something about these 2 (in particular) situations so close together, really brought a sense of overwhelming depression over me that I couldn’t shake. In the space of the same week and a half, I saw the deep depths of unethical business behaviour play out in front of me, a female business owner.

First, I had a client tell me that he and his team wouldn’t pay their bill because they didn’t respect me and the fact that I was a woman (verbatim). This same client, a few weeks before this, had asked my husband and I out on a double date with him and his wife because he wanted us to be friends. Needless to say, we aren’t having them over for a BBQ.

A few days later, it became apparent that a man with whom I built a scalable business partnership with had lied to me for several months, stole my proprietary business information, shared it with other people, and copied the service I was selling. He spread lies to my clients, (whom I lost), and did this all while pretending to just be “busy” because his team was missing a team member. The missing team member? He told me that this person’s wife had had a premature baby who might need an ostomy. All a lie – yeah, this guy was so scummy that he lied about a BABY NEEDING AN OSTOMY to distract me from realizing what he was doing. Would he have done this to a “comparable” male business owner?

It’s one thing to face business issues when you do a bad job (we don’t), but when it comes down to people not respecting your gender, you feel pretty lost. I actually talked to my husband about closing up shop because I couldn’t figure out what I could possibly do in these situations. People (men) didn’t respect me because of my gender. What was I to do?

Then I had to go on vacation. Yeah, “had to.” I just didn’t feel like I was going to enjoy it, considering how upset I was. I felt like it was a waste of a trip. We went anyway.

On the first full day of our vacation, I had gone up to the pool to save a set of pool chairs, as we always did, before we went for breakfast. I left a bunch of our stuff on them to make it obvious the chairs were taken.

When we came back to sit on them, I saw that our stuff had been moved and someone was sitting in those chairs.

And that’s when it hit me.

This guy didn’t care at all that someone else had put their stuff on the chair. All this guy cared about was himself.

They didn’t care that they were being jerks, they just did what they needed to do to serve themselves.

And that’s when I decided: I’m not going to care either.

Obviously, being the good human being I was raised to be, I wasn’t going to be exactly like those people, but I was ready to change my ways. If these people didn’t care about me, why should I care about them?

You’ll remember that last summer, I decided to say “screw it” to hiding my ostomy under a bathing suit. It was pretty liberating to do that after so many years of searching high and low for bathing suits that would hide it.

Even though it was a big deal for me at the time, it wasn’t that big of a deal because it was just at the pool in my own condo and I wasn’t fully ready to take it out into “the wild.”

However, with my new “I don’t care about anyone because they don’t care about me” mantra, I decided to let my ostomy hang out by the pool of this very judge-y hotel and see what would happen. (By judge-y I mean, all the women there are basically in an Instagram competition, no joke.)

And you know what? No one stared. No one asked. No one even glanced!

Because, as I had begun to realize, no one cares.

Maybe it was a stretch to connect the “these people treated me like dirt so now I’m going to show off my ostomy” ideas, but the premise was there and boy was it true.

Every day, I threw on a cute bikini that showed off my ostomy, not worrying about the fact that it stuck out the top (tucked in the bottom for comfort) and enjoyed getting a proper tan.

Throughout the entire trip, not one person made a weird face, pointed, whispered to their friend, or anything.

In fact, I barely saw anyone look at me at all.

Everyone was in their own #vacationmode and couldn’t care less about the people around them.

So, here it is everyone – here is your new, New Year’s (and forever) resolution: stop caring what anyone thinks of you, because they don’t think of you.

My husband has been right by my side throughout this whole episode. He’s been mad with me at how awful these people have been, he’s been sad with me when he’s seen how depressed I was, and he even supported me when I said I was just going to quit and be a housewife (it’s been an ongoing conversation). He’s the person who I would do anything for, and who would do anything for me, even if it meant working harder so I could be happy. (Don’t worry, I don’t give up that easy.)

These other people? Screw them. They didn’t care about screwing me.

I’ve had a few conversations with current clients, and even a new client, who were shocked at how terrible these “business men” were. The new client even asked me what I was going to do in retaliation!

I told him that it wasn’t worth spending the little time and energy that I have on the people who didn’t bother to spend it on me. No one ever got anywhere working backwards, so that’s why I’m pushing ahead to be better at what I do.

Sure, being a woman is always going to get in my way, and I’m going to keep my eyes open a little wider from now on, but I am not going to stoop to the same level. I was raised better than that and I can sleep at night knowing I’m not screwing people for my own gain.

When it comes to my ostomy, it saved my life, and I’m going to live my life with it the way I want to.

Remember, no one cares about you.

Don’t care about them.

Live your life the way you want to with the people who care about you in return.

Help shape the future of ostomy awareness and education by sharing your story for our new project!