13 May Frankly, My Dear, I’m Terrified

Posted at 22:52h in Uncategorised by Jessica Grossman 51 Comments
Share

The story of my journey to the ostomy is something I talk about quite often. I tell the story to small groups, to large audiences, and to individuals one-on-one. I tell the story almost like a fairytale, framing Crohn’s disease as the evil Dragon, myself as the helpless Princess, and the ostomy as my Knight in Shining Armour.

And the Princess and the Ostomy lived happily ever after.

I tell my story as if it was just that; a story; a beginning, a middle, and an end.

Unfortunately, 10 years later, I’ve had the unfortunate realization that there never is an end to anyone’s Crohn’s story. Not even mine.

The evil Crohn’s Dragon is back. And I am terrified.

I noticed that something was wrong when I discovered small lesion on my stoma (the intestine that sticks out of my stomach) and I had some uncomfortable pain in my abdomen. I immediately booked an ileoscopy (a colonoscopy for those without colons) to investigate as soon as I could. Sure enough, I awoke to the news that my Crohn’s had come back.

I was instantly put on an immunosuppresant drug (a drug that lowers your immune system making it very easy to get sick) called Imuran, and began the process to get myself covered for the other drug (Remicade) that costs $8,000 a dose and has to be given intravenously every few weeks. I also put myself on a soft food/liquid diet and cut out all my alcohol consumption (which, realistically isn’t such a bad thing after the year I’ve had.. haha). In 6 months, I was told, we would reassess.

This is the first time I am facing the disease as an adult and taking my medical care into my own hands. The last time I was got sick, I was only 9. Now, at 23, I am the one being told all of the facts, the options, the choices, and the risks. I make all the decisions.

Not only that, but this time, unlike the last, I actually know looming possibilities that are ahead of me if I am not careful. I could end up back in the hospital, unable to eat, unable to move, unable to stay awake in a haze of drugs, having to deal with a crippling amount of pain, and unable to live my life. I know what’s potentially on the horizon for me. I’ve been there before.

In the meantime, however, I am living life. I refuse to let the disease get in my way.

Which, luckily, right now hasn’t been that hard. I actually feel pretty good. Minus a few stomach aches here and there and minus the fact that I don’t get to eat much of anything at all, (some of my friends would say it’s not much of a change anyways…) I’m still a normally functioning human being. I am partying with friends, hanging out with my boyfriend, going to family dinners, working, shopping… In fact, I went to the gym today and exercised without an issue! At least, I didn’t have any issues until later as I walked out of the subway station and walked to the hospital for my appointment today and almost puked from nausea thanks to my other medication. (Try to fix one problem and get a bunch more, right?)… Ginger ale is my new bff.

The point is, I am actually doing pretty well, at the moment and I have my ostomy to thank. Yes, my Knight in Shining Plastic.

Without my ostomy, I can very much guess that I would be in much more pain as my food would have a longer path to travel to digest. I would also probably be running to the bathroom constantly, and I also probably wouldn’t be able to sleep from both those issues. All of these symptoms were what made dealing with my disease horrendous when I was a kid. However, thanks to my bag, I only get a bit of stomach pain for a very short amount of time and my bathroom time hasn’t changed. The ostomy really has been my life-saver. Even now.

However healthy I am feeling right now, I still can’t help but worry.  It has actually been a bit of an emotional rollercoaster for me since the diagnosis. I’ve gone from trying to ignore it, to trying to rationalize it, to even, if I’m going to be honest here, crying over it (though barely, since I really don’t cry and I’m strong and brave and all that…cough.). The emotions have been tough, but I have a great support system around me to help and I couldn’t be more grateful.

Unfortunately, no matter how many supportive people I have around me to help me through, the majority of the emotions and worry that I feel are not about the here and the now. These emotions are not about dealing with the immediate symptoms or the annoying and painful treatments I have to go through. They are about the looming future I could face.

I’ve been there. To hell.

And the thought of going back is terrifying. 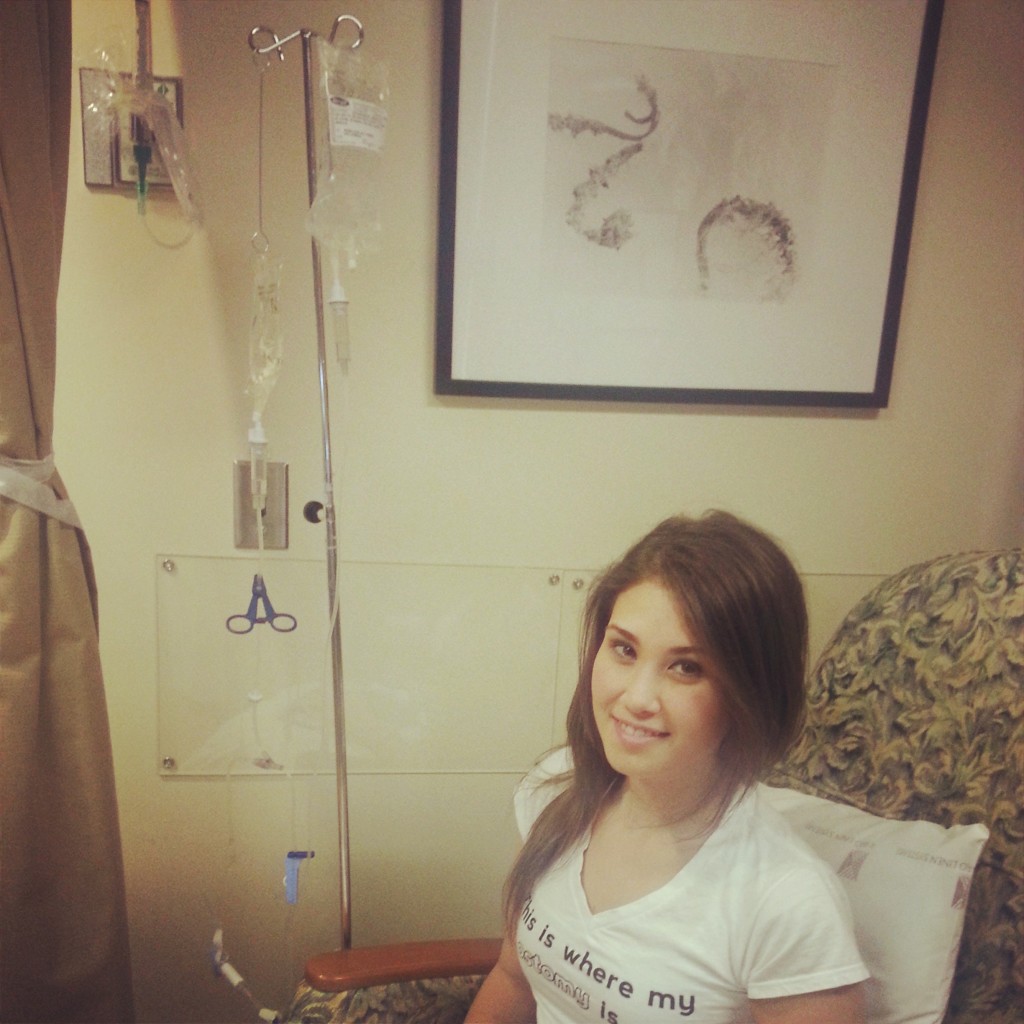 Getting my first Remicade treatment at Mt. Sinai Hospital in Toronto

Besides, we all know, the dragon never wins.