When the answer is good and bad all wrapped into one flappy bowel. - Uncover Ostomy
2583
single,single-post,postid-2583,single-format-standard,ajax_fade,page_not_loaded,,qode-title-hidden,qode-child-theme-ver-1.0.0,qode-theme-ver-10.0,wpb-js-composer js-comp-ver-4.12,vc_responsive

23 Sep When the answer is good and bad all wrapped into one flappy bowel.

I, apparently, have a flappy bowel.

For the past 10 months, as you all know from seeing me complain all over the internet, I have been unable to eat real food. Peanut butter, coconut milk, protein shakes, and sometimes tofu has worked just fine, but anything more solid than that would throw my body into utter distress.

My biggest fear was that my Crohn’s was back.

Besides a small flare I had 2 summer ago (that was quickly nipped in the bud with Remicade, before it gave me an anaphylaxis near-death reaction), my Crohn’s has been at bay since January 2003. I am one of the lucky ones who has managed to fend off the disease for a long period of time.

However, after multiple tests and a 10 month soft-food-only diet, my Dr. was still unable to figure out the cause of my food-related pain. My bloodwork was normal, I had tons of energy to work out, and I wasn’t having any of the other symptoms that come with the disease. My body was a pretty puzzling little mystery.

Finally, yesterday afternoon, as I sat across from my Dr. at Mt. Sinai Hospital in Toronto, we discovered what has been the bain of my existence for almost an entire year.

A CT scan showed that my bowel has become “loose” enough to twist itself into a weird zigzag formation. This zigzag exists right at the end of my digestive system, right before my stoma, and is making it extremely difficult for food to pass through.

Think of Ross, Chandler, and Rachel from Friends trying to get that couch up the stairs.

Pivoting was just not going to do it for them.

And neither was it going to work for any food that was bigger than the corner it needed to get around. And it’s a pretty tight corner. You can see it here: 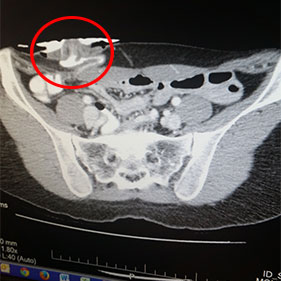 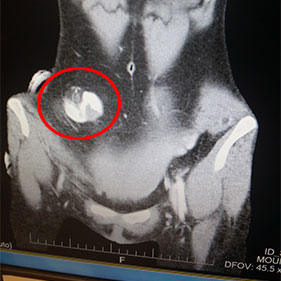 Both of us were relieved to discover that it’s unrelated to Crohn’s, meaning there was no need for any medication. Medication often produces side effects worse than the disease itself, so this was a weight off my shoulders. So, what was next?

“You can just like, get in there and wiggle it back to normal, right?” I asked him.

He proceeded to tell me that we could book a scope appointment and he could attempt to put it back in the right spot, but it was more likely that I was going to need surgery to get a completely new ostomy.

Apparently, the only real way to fix something like this is start from scratch. Fresh intestine, different spot, new ostomy.

Ok, so most of you don’t know this, but the skin around my stoma (the output area of the ostomy) is a mass grave of scarred tissue. After I had surgery back in 2003, my Crohn’s affected the surrounding skin of the surgical site and I had to get silver nitrate treatments to BURN OFF the diseased skin. No one sees it because it hides under my bag.

If I was to get a new ostomy, the crevasses of my mutilated skin would be available for all to see. Not to mention that my ostomy is currently in the ideal spot, and who knows where it could be moved. Also, surgery is never fun and I have no time to devote 2 weeks or more to recovery. I barely have enough time to sleep in a day.

Yes, I know – I have my ostomy in an wonderfuly low spot, my scars are minimal, and it’s amazing that it has lasted me for almost 13 years. Yes, I am lucky and I know it.

But that doesn’t mean I can’t be utterly terrified at the idea of change.

Am I going to go through with it? Well, first we have to see if the scope works. Maybe I will be lucky enough that my Dr. can use some fancy Dr. skillz and put it back into place. If not? I’m not entirely sure I will. I will at least be waiting until after my wedding (a year from now) before I make any sudden movements.

Maybe this will have to become my new normal.

Honestly, I have no idea.

I am absolutely terrified of what’s to come.

In the meantime, I’ll have another protein shake, please.

Waiting to see my GI #doctor at Mt. Sinai and hoping he can help me figure out why I can’t eat. | I haven’t had #vegetables in almost a year and I miss them so much. #peanutbutter and #protein shakes can get really boring. All I want is a #quinoa salad!