Chuck it in Your F*ck it Bucket: Why I'm Over it and You Should Be Too - Uncover Ostomy
17134
single,single-post,postid-17134,single-format-standard,ajax_fade,page_not_loaded,,qode-title-hidden,qode-child-theme-ver-1.0.0,qode-theme-ver-10.0,wpb-js-composer js-comp-ver-4.12,vc_responsive 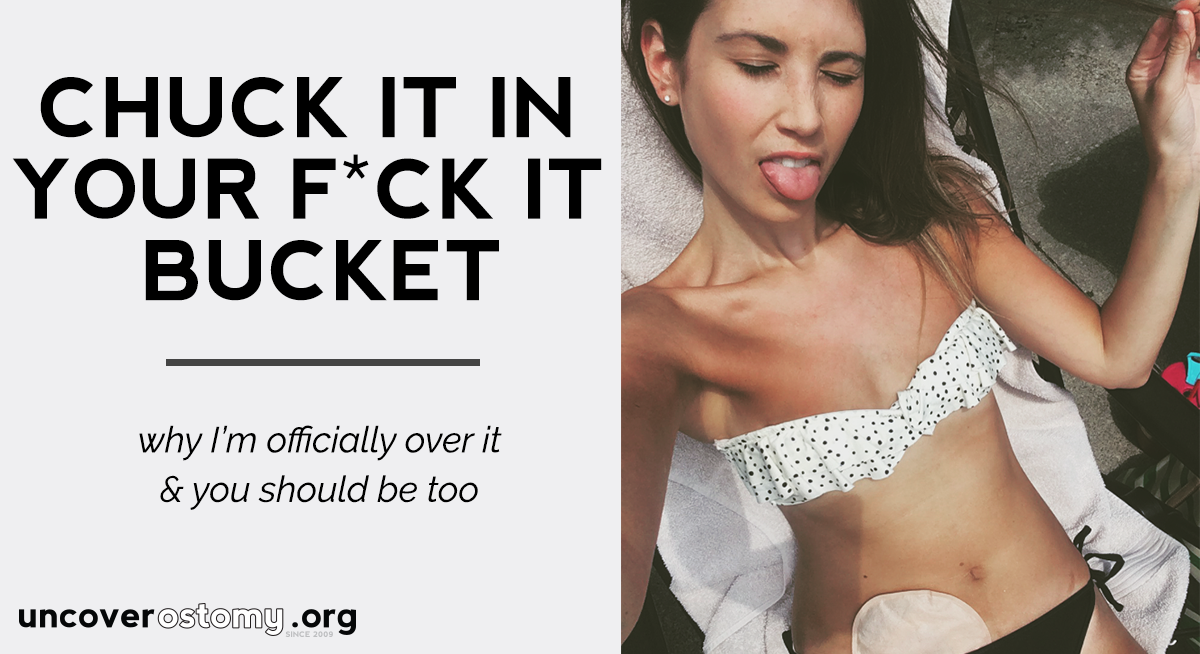 17 Aug Chuck it in Your F*ck it Bucket: Why I’m Over it and You Should Be Too

I’m officially over trying so damn hard to hide my ostomy.

I 👏 AM 👏 OVER 👏 IT 👏. I’m officially over trying so damn hard to hide my #ostomy & here’s why ➡️ Since I got my #ileostomy in ‘03, I’ve tried to hide it. Don’t get me wrong – I’m SO proud of it & to be alive ‘cause of it (which you know from @uncoverostomy!), but I’ve *never* just let it hang out! ⬇️ . . To me, it’s a pseudo bum (it’s taken over a lot of it’s job), & I’ve treated it as such. So if I didn’t want to see other people’s bums (no thanks), they probably didn’t want to see mine! ⬇️ . . I always loved talking about my #ostomybag in tight jeans & asking people to guess where it was. I spent a lot of time/effort to find clothes to hide it, but mostly on #bikinis. It’s easy to blend my bag into jeans & a T (or a #weddingdress if you saw me in @huffpost/@yahoostyleca) but it’s harder in #swimwear. ⬇️ . . Years back, I bought tiny bikini bottoms & thought I could find a way to wear them & still hide my ostomy. I did, but I was constantly tucking/rolling it in & trying not to move to keep it in place. . . Finally, I said, F this, & sat by a pool in those bikini bottoms with my bag out & it felt UNREAL. No one gave 2 shits about it! 🙏🏻 . . Things have changed, not only for #ostomates, but anyone with a difference. The internet has let us open up, share our stories, & be proud of ourselves, while teaching society to be more open to disabilities, diseases, & #poopbags! So chuck it in your f*uck it bucket: it’s our time now. . . More on #uncoverostomy! Link in IG story 📸

Since I had ostomy surgery in 2003, I’ve always tried to hide it.

Not because I’m ashamed of it (I mean, duh, look at this website, obviously I’m not!) but because I always thought it would make other people uncomfortable. That’s why I’ve never been one to just let it hang out, and have spent lots of time and effort to find clothes that would blend it into my body.

I did it for the sake of those around me.

To me, the ostomy is as a pseudo bum. After all, it took over a large part of my bum’s job, so I wear clothing that hides it because I figure, if I don’t want to see someone else’s bum, then they probably don’t want to see mine.

I’m pretty damn good at keeping my ostomy invisible. I wore a skin tight wedding dress without a line or a bulge, and I honestly consider that an achievement. (In case you missed it, my story was featured in Huffington Post and Yahoo Style!) I’m all about ostomy awareness, (clearly,) but not on my wedding day. There were more important things at hand!

One of my favourite things about being so good at hiding my ostomy is the times when I’m wearing super tight jeans or leggings and someone tries to guess where the bag is, to no avail. I like being able to prove that I can still wear stylish clothes without waving my pseudo bum in everyone’s face.

While jeans and a T-shirt might be a pretty easy combination for me (based on where my ostomy is,) bathing suits have always been a struggle. They are for most ostomates.

Every so often, I post photos here or on my Instagram of myself in high-waisted bikini bottoms or in one-pieces that I adore and which keep the bag concealed. That’s only after I’ve done a lot of shopping, searching and trying on to find the suits that work. Most bathing suits are literally just strings of fabric, so how are you supposed to keep a bag in there?! When I find what works, I am always happy to share with you all.

One day on my search for a new bikini, I saw a pair of super tiny black bikini bottoms and decided to take on a challenge:

“Maybe I can make these work.”

However, to get those itty-bitty bikini bottoms to hide my bag, I had to roll, tuck, squeeze, cut, and basically not move for it to stay safely concealed behind the small piece of black fabric deemed appropriate for water activities. It’s been worth the effort for the tan lines, but it’s always been a pain in the… bag.

A few weeks ago as I was getting ready to sit by my condo’s the pool, I pulled out those tiny bottoms from my pile of one-pieces and high-waisted bottoms. I looked at them for a while and suddenly just thought, “f*ck it, why not?” and I decided to wear them as a “normal person” would. I tucked in the bottom of the ostomy bag into the suit (so it wouldn’t flap around, which is annoying) left the top of the bag peaking out of the fabric and  I went outside to sit in the sun.

Literally, no one gave 2 shits about it.

And when I say no one, I literally mean no on even bothered to notice. Not a second glance, not a deep stare, maybe a quick “oh hm,” (but if that did happen, they carried on with their lives within a split second,) and…

I felt so free, so at peace, so relaxed… and my tan lines were finally normal!

My world opened up.

Now if I can be honest, I don’t know if I would go back in time and change the way I used to wear my swimsuits.

I think that, back in 2003 and around that time, society was in a very difference place. I know this because, back then when I would tell people that I had an ostomy bag, their response was either confusion from not knowing what it was, or a tiny bit if disgust, until I explained it properly to them.

In 2003, you also had a lot more people being rude and mean to those with visible disabilities. I think, as a whole, society was much less accepting of ailments, diseases, and disabilities.

We’re now living in 2017 with the internet giving each of us our own megaphone to tell the world who we are, why we’re different, and how god damn proud we are to be who we are.

When I talk to people about ostomies now, I hear more people say “oh yeah, I heard about those,” or “yeah my cousin/friend/uncle’s brother’s mom/sister/husband has an ostomy!” Now it’s almost like everyone knows someone with an ostomy!

Thanks to the internet, and thanks to people like you, we’ve been able to change the way society looks at any type of difference. We’ve opened up and shared our struggles (whatever they may be) and our triumphs, and we’ve shown others that we’re just like them with just a few minor tweaks. These efforts have helped society grow to be more curious, accepting, and I even just say, over it.

Everyone’s got something, right?

Don’t get me wrong, there’s still a long way to go, and I’m not done just yet.

“Ostomy” is still deemed a misspelled word on Microsoft and here on my WordPress blog, and I’m still finding myself trying to explain how great life can be with an ostomy to those facing surgery.

But we’re definitely going in the right direction.

I’ll probably still tuck my ostomy in to some of my high-waisted bikinis or one-piece suits because I like them, and honestly, sometimes it’s just annoying to have the bag hang out! I’ll also still find and wear clothes to keep my bag hidden, but that’s only because there is a time and a place to show off your bum (like by the pool), and other times, it’s best to keep it to yourself. (Like, don’t moon me with your real bum, ok?)

What I can say is that I am definitely going to expand my bathing suit wardrobe into more exciting styles and cuts because if I have to look at other people’s bums by the pool, they can look at mine, too!

Have a favourite bathing suit that you wear when you just don’t give any f*cks? Share it on our Facebook page! I’d love to get some style tips from all of you 🙏🏻